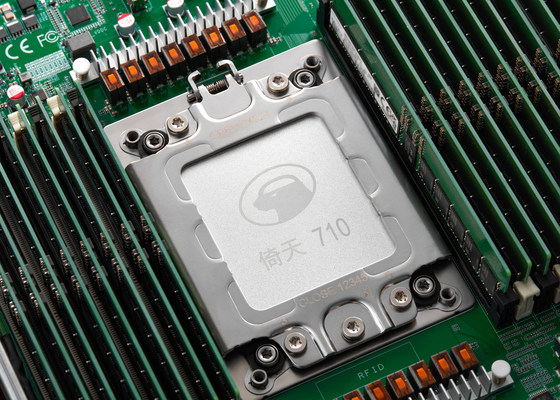 «Customizing our own server chips is consistent with our ongoing efforts toward boosting our computing capabilities with better performance and improved energy efficiency,» said Jeff Zhang, President of Alibaba Cloud Intelligence and Head of Alibaba DAMO Academy during the Apsara Conference, Alibaba’s annual technology flagship event. «We plan to use the chips to support current and future businesses across the Alibaba Group ecosystem. We will also offer our clients next-generation computing services powered by the new chip-powered servers in the near future.»

«Together with our global partners including Intel, Nvidia, AMD and Arm, we will continue to innovate our compute infrastructure and offer diverse computing services for our global customers,» Zhang added.

Yitian 710 achieved a score of 440 in SPECint2017 (a standard benchmark to measure CPU integer processing power), surpassing that of the current state-of-the-art Arm server processor by 20% in performance and 50% in energy efficiency.

Panjiu was developed for the next-generation of cloud-native infrastructure. By separating computing from storage, the servers are optimized for both general-purpose and specialized AI computing, as well as high-performance storage. With a modular design approach for large-scale data center deployment, these servers are expected to deliver exceptional economic value for a wide variety of cloud-native workloads, such as containerized applications and computed optimized workloads.

During the same keynote, Alibaba also announced that it will open the source code of the XuanTie IP core series, among other upcoming cores. The XuanTie series are Alibaba’s custom-built processors based on RISC-V instruction-set architecture. Developers can now access the source code of the XuanTie series IP cores on Github and Open Chip Community to build prototype chips of their own, which can be customized for IoT applications such as networking, gateway and edge servers. In addition, XuanTie-related software stacks, which support multiple operating systems, including Linux, Android, RTOS and Alibaba’s own AliOS, will also be opened. Alibaba will provide more services and support for development tools, SDKs and customized cores in the future.

«By opening up the IP cores of our in-house IoT processors as well as related software stacks and development tools, we aim to assist global developers to build their own RISC-V-based chips in a much more cost-effective way,» Zhang added. «We hope this move can encourage more innovation among the thriving RISC-V software community, and as a result help people enjoy the benefits of a connected world in the digital era.»

«Alibaba supports the RISC-V community through their continuous contributions, technical leadership, and deep collaboration with RISC-V stakeholders,» said Calista Redmond, CEO of RISC-V International. «Alibaba leads by example and has inspired the global RISC-V community to increase innovation in chip development with benefits to the entire RISC-V ecosystem.»

Alibaba released its first AI inference chip Hanguang 800 in 2019. The AI chip has been deployed in Alibaba Cloud’s data centers to power businesses in areas such as search, recommendation and live streaming.

Established in 2009, Alibaba Cloud (www.alibabacloud.com) is the digital technology and intelligence backbone of Alibaba Group. It offers a complete suite of cloud services to customers worldwide, including elastic computing, database, storage, network virtualization services, large-scale computing, security, management and application services, big data analytics, a machine learning platform and IoT services. Alibaba Cloud is China’s leading provider of public cloud services by revenue in 2019, including PaaS and IaaS services, according to IDC. Alibaba Group is the world’s third leading and Asia Pacific’s leading IaaS provider by revenue in 2020 in U.S. dollars, according to Gartner’s April 2021 report.