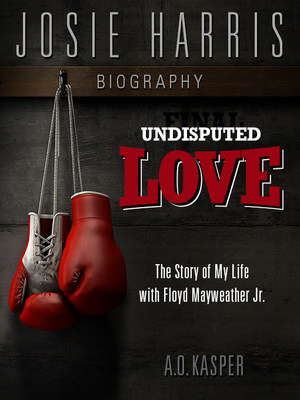 LOS ANGELES, June 10, 2020 /PRNewswire/ — On March 9, 2020, Josie Harris, former girlfriend of the professional boxing promoter and famous boxing champion Floyd Mayweather Jr. died alone in her car at her home in Valencia, California, at the age of 40. Harris was well-known for her appearances on Starter Wives Confidential and as the mother of three of Mayweather’s children. Now, Harris’s story of suffering through decades of domestic violence will be told through the soon-to-be-released book, «Undisputed Love: The Story of My Life with Floyd Mayweather Jr.,» written by first-time author A.O. Kasper.

«Finally, people may hear Josie’s side of the story by picking up and reading ‘Undisputed Love,'» said Kasper. «It will take the reader on an emotional roller coaster, revealing the constant chaos of love and abuse that Josie experienced for most of her life.»

Tragically, females aged 18 to 35 experience the highest rates of intimate partner domestic violence. Harris was an unfortunate victim of this statistic. Kasper’s biography chronicles Harris and Mayweather’s heartbreaking romance filled with mental and physical abuse. Before her death, Harris was writing a book detailing her relationship with Mayweather and giving an account of the numerous beatings she received by him. Unfortunately, she passed before she could finish it. Her story will finally be revealed through the new biography, «Undisputed Love.»

Harris met Mayweather in 1995, at a very young age, and fell instantly in love with him, before he received his fame and fortune. For years, the man she loved and the father of her three children caused much heartache, loneliness, and instability. In 2010, Harris filed a domestic battery report against Mayweather. In it, she claimed that he beat her and almost killed her in front of their children. The boxing champion served two months in prison, and the couple’s relationship ended. The new biography reveals what it was like to be in love with a famous person who inflicted so much pain.

Josie Harris was born in 1980 in Las Vegas and died in 2020 in her car at her California suburban home near Santa Clarita. She was an American actress, reality television personality, and entrepreneur, though she was most famously known as the former lover of the world champion boxer, Floyd Mayweather Jr. Together, Harris and Mayweather had three children: Koraun, Zion, and Jirah. For years, Harris has spoken candidly about her abusive relationship with Mayweather.