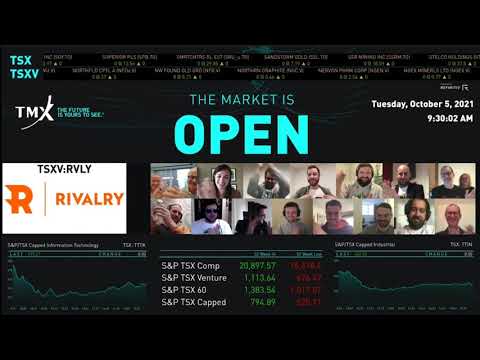 Rivalry is a fully regulated sports betting and sports media company operating globally. Focusing on esports, the company has built Rivalry into the most engaged esports betting brand in the world. With a wholly owned and internally developed proprietary tech stack, double-digit month-over-month growth, and profitable customer unit economics, Rivalry is building the leading betting and entertainment destination for the next generation.

For Market Openings: Media may pick up a feed from the TOC (television operations centre) for all market open ceremonies. The feed is named TSX Transmit 1 (SD-SDI) and is produced at the TMX Broadcast Centre and sent live to the TOC. To pick up the feed via the Dejero network, please contact avservices@tmx.com. The client feature video will begin playing on the TMX media wall at approximately 9:27 a.m. ET and the markets will open with the sound of a siren at 9:30 a.m. ET