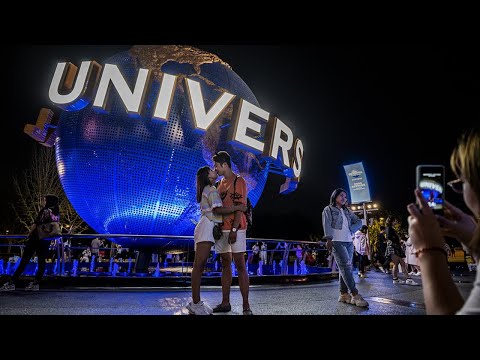 The Universal Beijing Resort officially opened on Sept. 20. This is the world’s fifth and the largest Universal Studios theme park.

It is a «universal» resort, but a «localized» approach can be seen in numerous details. For example, the Transformers story is set in China, and the headquarter Transformers Metrobase features many Chinese elements, such as ancient Chinese astronomical instrument armillary sphere; and images of Feitian, flying goddesses in Dunhuang cave frescoes. Chinese ink and wash painting style is also incorporated in its design. Kung Fu Panda, the popular animated movie series appeared in a Universal Studios theme park for the first time with its own park. Besides the Chinese elements that are already in the film, like Chinese Kung Fu and Mr. Ping’s Noodle House, designers also intend to let the traditional Chinese cultural elements echo with Hollywood creativity. Taking the architectural style as an example, the traditional red walls and gray tiles have been retained, but new designs of blue eaves tiles and jade roof ridges have also been added. However, some «neo-Chinese style» in this park were mocked by some visitors, for not presenting the essence of Chinese culture. Nevertheless, such minor flaws didn’t dampen the eagerness of visitors. In future, «localization» will still be the resort’s pursuit: It plans to hold seasonal activities revolving around various Chinese IPs, such as popular video games among Chinese youngsters.

In fact, the Universal Beijing Resort project has already become official for 20 years, and detailed discussions and coordination kept going on over the time. From the overwhelming demand for tickets to the resort, we can see all the preparation are worth it. Whether it be the Disneyland or the Universal Studios, the successful launch of these Western theme parks in China are not merely commercial cooperation, they also stand for acceptance and compromise — Chinese and U.S. cultures are hugging each other despite distance and difference. In recent years, the China-set film «Mulan» and superhero movie «Shang-Chi and the Legend of the Ten Rings» have been released, and the adaptations of the Chinese sci-fi trilogy «The Three-Body Problem» grows increasingly popular among international audiences, all these proved that cultural communication has not and never will be interrupted.

As the pandemic continues to rage around the world and the relationships between major countries grow relatively tense, even joyful places like the Universal Resort are not free of noises. Still, cultural and entertainment fruits enjoyed by the public, are not supposed to be restricted within certain borders. The theme park is one of the many bridges, that will help promote cultural communication and integration, and deepen mutual understanding and trust between people in China and the U.S., which will also facilitate more positive interactions in other fields.